Chef Ray was born in England and trained in London at the legendary Claridge’s Hotel and The Savoy. He then moved to the Michelin Star rated, Mirabelle, where he became the youngest Chef de Partie Saucier.

Ray moved to Canada where he led Ciaros restaurant at the King Edward Hotel in Toronto.  Chef Ray has held the Executive Chef position at numerous award-winning restaurants across Canada including the Fairmont Empress Hotel Victoria, Fairmont MacDonald Hotel in Edmonton, and Westin Harbour Castle in Toronto.

While stationed at the Atlantis and One & Only Ocean Club Resort in Nassau, Bahamas he catered for a variety of celebrities including Sean Connery, Celine Dion, and Oprah Winfrey and also received the Conde Naste gold award for food.  His is also the winner of the Roux Brother Young Chef competition in London, England and has received a number of culinary gold medals.  Ray was selected as a cook for the Royal Wedding reception of Prince Charles and Lady Diana.  He was also selected as one of the top five regional chefs to reopen Canada House in London hosting Queen Elizabeth and Prince Philip.

Chef Ray resides in Fenwick, and is thrilled to expand his culinary journey into his own ‘back yard’ with the opening of Root & Bone in Fonthill.  He is passionate about the Niagara Region and the culinary wonders it has to offer – many of which will be featured in his restaurant, including an assortment of locally-sourced wines, meats and produce.

Chef’s motto is:  “Farm to Table – Table to Soul”.  He is ready to peel back the layers, going back to the craftsmanship behind creating the foods that are closest to his heart for the people in his community.

Here’s a look at last year’s menu to give you an appreciation of the taste experience that you can look forward to as our 5 awesome LOCAL CHEFS go head to head and bun to bun.

Come join us and relax to the soulful sounds of live Blues in the park while you savour the tastes created by our featured Chefs.

Sliderfest Tickets are available from any Fonthill Lions Member and will be available for sale every Thursday at our Pelham Suppermarket booth or email info@sliderfest.ca and we’ll make arrangements to deliver tickets to you.

Tickets for SLIDERFEST 2018 are now available online here. Early Bird price of $30 until July 31st – $35 for purchases after that date. 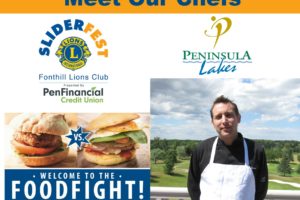 Chef David Levar’s cullinary career started in the Muskokas in[...] 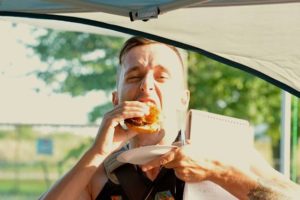 Thank you to everyone who joined with this to make[...] 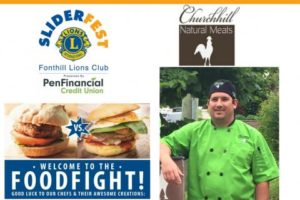 Sliderfest 2018 is a return engagement for Chef Raymond Haymes[...]

Matt Davis is the Kitchen Manager at Iggy’s Pub and...

The Fonthill Lions invite you to come play in the park at...

Sliderfest 2018 is a return engagement for Chef Raymond...

We're currently offline. Send us an email and we'll get back to you, asap.